The Food of Kenya

The traditional food of Kenya, is as mixed and diverse as its tribe's, history and landscapes. Each tribal area has its own specialities, but below are some of the most common Kenyan food dishes that you can sample whilst on your travels.

Kenyan Food to Start the Day

Kenyan breakfasts tend to be a fairly sparse meal compared to Western ones. Generally, most Kenyans start their day with Chai (Swahili word for tea), this is usually very milky and sweet.

Accompanying the chai is just a hunk of bread (mkate in Swahili) and maybe a piece of fruit. In more affluent households, in the city and coastal areas, you’ll find mandazi. Which is a kind of deep fried dough similar to an unsweetened doughnut, that tastes and smells divine.

As tea and coffee is grown in Kenya these are the favoured beverages across the country. Both the tea and coffee is so good, many travellers end up taking some home with them. In the more rural areas you’ll find maziwa lala, which is a fermented milk, it is easily digested by someone that is lactose intolerant, which many Kenyans are.

Soda’s are of course popular all over the world and Kenya is no exception - there is nothing better to depict modern Kenya than seeing a traditionally dressed Maasai warrior in all his regalia, drinking a bottle of soda, usually with a mobile phone hanging on his belt.

Plantain crisps, made from the plantain banana, are sold all over Kenya; in supermarkets and on street markets as is “chevdo” (also known as Bombay mix) which is made up of deep fried flour noodles, peanuts, spices, chickpeas and lentils served cold, delicious.

For natural sweets Kenyan’s enjoy “mabuyu”, which is the seed of the Baobab coated in red sugar syrup - again delicious and worth a try, you can buy them in virtually any market in East Africa.

The main staples of Kenyan food and cuisine are: Maize meal (called Ugali when cooked and unga when raw) and rice. Ugali is usually served as a white stiff porridge, good for dipping in stews or making into a makeshift spoon when you eat with your hands. Rice can be served in so many different ways, but usually it is plain boiled rice.

On special occasions, like weddings and feasts, the rice is transformed into a wonderful fragrant mound of colourful hues infused by the spices added like saffron, turmeric and cayenne plus nuts and dried fruits, it is a celebration of food, known as pilau rice (influenced by Indian cuisine probably dating back to when the Portuguese invaded with the aid of the Goans).

Stews are mainly served for lunch and dinner, they can either be vegetarian like maharagwe (a tasty bean dish with onions, tomatoes and spices all boiled together, making a thick bean sauce) or a meat stew, normally goat.

Served with the ugali and stew is a vegetable dish made from kale, onions and tomatoes called skuma wiki (which literally translated means ‘stretch the week’). Kale, like many vegetables, grows all over Kenya and is found in most gardens. Another vegetable side dish that is popular is kachumbari, which is basically a tomato, chili and onion spicy salsa, good for waking up your taste buds.

As a treat, the stews are sometimes served with chapatis, which is an Indian flatbread, the dough is freshly prepared and then rolled very flat before being shallow fried in plenty of oil, served warm, they are soft and pliable but have a lovely crisp edge, they are great for mopping up the juices of the stew.

Then of course there is “nyama choma” - which translates as burned meat! But is a flavoursome Swahili barbeque. The meat is usually beef or goat and occasionally chicken.

Kenyan’s are known to be partial to a biscuit to two and make some great macaroons known as biskuti ya nazi (coconut macaroon biscuits) Hopefully this has whet your appetite to go there and try some Kenyan food for yourself. 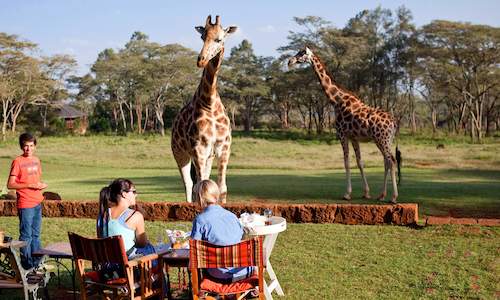 Nairobi is one of the many bustling African cities located right in the heart of it all. Tourists often stay at Nairobi hotels before they h...more
Kenya Travel | Best of Kenya Safari and Tour
©2022 Siyabona Africa (Pty)Ltd - Private Tours and Safari