True Story of Christian The Lion
Born to be Free

Christian the Lion and his owners, John Rendall and Ace Bourke.
Christian the lion, a true story of the relationship between man and animal, and Christian's extraordinary journey from zoo, to Harrods and finally to the wilds of Kenya.

This incredible true story of love between man and animal, highlights the trust and love humankind has towards wildlife and how that bond endures. Christian was born in Ilfracombe Zoo, Devon in August 1969; he was part of a litter that had been rejected by their mother.

The litter was hand reared by the zoo keepers, but when Christian and his sister were a few months old, they were sold to Harrod’s, the prestigious department store in London.

©Derek Cattani
Christian the Lion in a car driving around London.

John Rendall and Ace Bourke, had just come over from Australia and were working in London at an antique pine furniture shop, called Sophistocat. When they were exploring London they visited Harrod’s, and saw this small lion cub in the window. With no further thought, they bought the cub and took him home to their flat in Chelsea.

They named the cub Christian, as an irony of Christians being fed to the lions. They made a home for Christian in the basement of the Antique shop, and they lived above the shop. Both having grown up with pets, John and Ace looked after Christian and treated him as a giant pet, part of the family. There are some iconic photos of Christian gadding around London in an open topped car, but in general Christian’s life was stable with walks in the local area a daily occurrence.

Christian had a gentle and gregarious temperament, but as all babies do, Christian started to get bigger and was becoming more difficult to control in the London environment. Fortunately, one day Virginia McKenna and Bill Travers, actors from the movie “Born Free”, by chance visited Sophistocat Antique Shop and saw Christian. They were enchanted by Christian and suggested that Ace and John contact George Adamson to rehabilitate Christian back into the wild, and to set him free.

Ace and John hadn’t actually thought of this option, but knew that as a fully grown lion, Christian wouldn’t be able to stay in London. So they contacted George Adamson, who put the wheels in motion with Kenyan Wildlife Services to introduce Christian to Africa.

George Adamson with Christian the Lion in Kenya.

It took months for the bureaucratic wheels to turn in Kenya and for permission to be granted allowing Christian to travel there. In the meantime, Ace and John gave up their jobs in London and moved into a caravan, near to Bill Travers home 30 miles outside of London, out in the countryside. Here there was more space for Christian to exercise and move around in.

There was a lot of work needed to be done to get, the nearly one year old Christian, ready for the wilds of Africa, as on arrival to the English countryside he was even scared of a scarecrow, and showed very little aggression. Virginia and Bill built a large compound on their grounds for Christian, this was the closest that he had ever been to the “wilds”. Christian settled down well and seemed to enjoy being outside and investigating his surroundings.

Ace and John knew that these times with Christian were special and maybe their last, so they wanted to spend as much time with him as possible. Christian’s lion instincts were surfacing, but after four months of constant attention with Ace and John a strong bond was being forged. As Ace Bourke says in an interview; “He was dependant on us, but he also loved us, as we were the closest things to him”. Meanwhile in Kora Nature Reserve, Kenya, George Adamson was readying his camp to accept Christian. George was already working with wild lions that needed rehabilitation, and had a small pride that he wanted Christian to be introduced to.

After a long flight, Christian still had to travel another 200 miles in the African bush to finally arrive at Kora Nature Reserve. It must of been such a shock for Christian to suddenly find himself in such a different environment. Ace and John travelled with him to Kenya. His first night in the Kenyan bush was ignominio His first encounter with hippos and crocodiles, produced no aggression in Christian just mild interest. John and Ace were appearing relaxed, but the reality was that they had a” London lion” in Africa! His background put Christian at great risk in the wilds.

Other challenges were meeting George’s man made pride of lions and eventually wild lions, who were not too pleased for another male to enter their territory. George saw that Christians natural instincts were intact, but he was extremely inexperienced in this environment. His first year in Kenya, was anything but easy. There was a lot to learn.

Derek Cattani documented on film Christian's time in Africa with George Adamson and made documentaries produced by Bill Travers that helped to fund the costs of sending Christian to Kenya, they also aided George in maintaining his camp at Kora to continue to rehabilitate other lions. “Christian the Lion” documentary is still available from the Born Free Foundation. 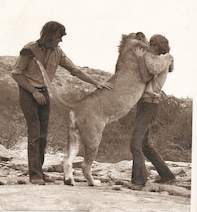 John and Ace reunion hug with Christian the Lion in Kenya.

A year after leaving Christian at Kora, in 1971, Ace and John returned to visit him, against a lot of advice that it would be a wasted trip. They filmed this momentous trip of a rapturous reunion between two men and a now wild lion.

They were very unsure of what their reception would be when they encountered Christian again, and of course it could be very dangerous. After an anxious time, Ace and John walked into what had then become Christians territory. George appeared on the top of the hill, about 100 m away, with Christian right behind him. Christian stopped and took a long hard stare at the two men, taking his time he slowly ambled down the hill towards the men.

The men, no longer able bear the anticipation and tension, eventually called out his name; Christian came bounding towards them and jumped into their arms, showing a heartfelt recognition and a joyous reunion. He had not only recognised them, but was excited to see the men again. An incredible reunion.

In June 1972, Ace and John embarked on another journey to Kenya, hoping to see Christian, now 3 years old, again. George had warned them that Christian might not even come to camp, but after three days of waiting, Christian made his way back to the camp. This time he was very different from the time before. He was much, much bigger and had matured. He was far more dignified and no longer boisterous in his greeting, but had not lost any of his charisma.

He would sit with the men for a short while, then just get up and move away, showing that the men were superfluous to his life now. Christian was no longer a pet, but a full grown lion. However, on the last night of Ace and John's visit, the men sat up all night laughing and joking with Christian playing the fool, just as he used to as the “London Lion”. Come the morning though Christian left to rejoin the other lions. They never saw him again. It was a success, he was no longer dependant on the two men, he had become an African lion.

Christian stayed with George at Kora, but was continually getting into scrapes with the resident lions there. He started to stay away from the camp for longer periods, and was last seen in 1973, heading towards Meru National Park. As he had managed to survive this late introduction to Africa and had managed to grow into a full sized lion, Ace and John presume that he managed to find his own pride and live a full life as an African lion, for at least the next 7 or 8 years. They hope that some of Christian's progeny still live on today in Kenya. 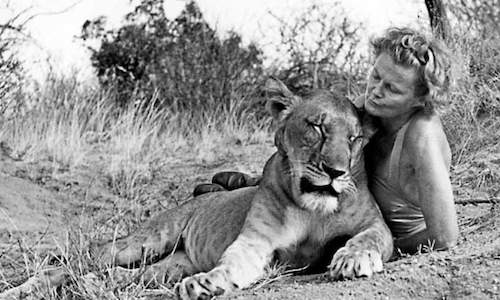 The story about Elsa the Lioness and a book called Born Free continues to capture the hearts and minds of people everywhere. Joy and George ...more
Kenya Travel | Best of Kenya Safari and Tour
©2022 Siyabona Africa (Pty)Ltd - Private Tours and Safari