The Tsavo West National Park forms part of one of the greatest wildlife conservancies on Earth. It is known for its Red Elephants and the legend of the Maneaters of Tsavo.Tsavo West forms one of the largest wildlife conservation areas on Earth and is one of the largest national parks in Kenya. The park has abundant wildlife, but due to its size and thicker vegetation game viewing is more challenging. For this reason it is less popular than the Maasai Mara and Amboseli. However, the park has one of the most diverse landscapes in East Africa, with several volcanic craters and interesting hills.
Safari Tours through Tsavo West

The Tsavo National Park forms one of the largest conservation areas in the World. For administrative purposes it was divided into two national parks, namely, Tsavo East and Tsavo West. The park is located in south eastern Kenya about 240km (150 miles) from Nairobi on the highway to Mombasa.

Most guests will drive-in or be driven to Tsavo West from Nairobi, Mombasa, or enter from the adjacent Amboseli National Park. The main access routes are through Chyulu Gate from Amboseli and Mtito Andei Gate from Nairobi. Visitors from Mombasa will make use of Tsavo Gate near Manyani.

Airport - There are three main airstrips in the Tsavo West National Park at Kilaguni, Finch Hattons and Ol Donyo Wuas. However many of the lodges have their own private airstrips.

Tsavo is historically famous for the Maneaters of Tsavo, two maneless Lions that developed a taste for human prey during the early 1900's. They were eventually shot after killing 130 people who were working on the Mombasa-Nairobi railway line. It was also a major battleground between the British and Germans during World War I.

Today the region is much more tranquil, and is known for its Red-coloured Elephants, which love to dust bath in the red coloured soil. The park has many interesting geological features due to volcanic activity.

The park is massive and the wildlife is spread out, so you will need to take some time to see the wildlife and fully appreciate this national park. Walking safaris are a great way to take in the beautiful savannah scenery as well as see the Shetani Lava flow. This is estimated to have been from an eruption 200 years ago. It covers an area of 50km square and has interesting caves to explore such as the Shetani Cave. Boating safaris are offered on Lake Jipe and for the adventurous traveller, rock climbing can be arranged at Tembo Peak.

The main focus of the park is on the Mzima Springs which produces 350 million litres of fresh water a day, and in fact provides most of Mombasa's water supply. There is an underground hide here which provides a window into the antics of Hippos underwater as the water is so clear.

Finch Hattons Camp - This private camp allows you to experience the golden colonial era of the safari. Denys Finch Hatton was renowned for the lavish style of his safaris and now you can experience a stylish safari in the tradition of days gone by. Accommodation is offered in luxuriously appointed en-suite safari tents. Explore the park on guided morning and evening game drives and exciting nature walks.

Voyager Ziwani - Voyager Ziwani Camp is a Tsavo safari camp situated on a private conservancy on the edge of the Tsavo West National Park. It offers a tranquil wildlife retreat during a Kenya safari holiday.

The Tsavo West National Park has a moderate climate as it is located close to the equator. The temperatures range between 20 and 30 °C. There are two wet seasons, the long rains between March and April and the short rains between November and December. 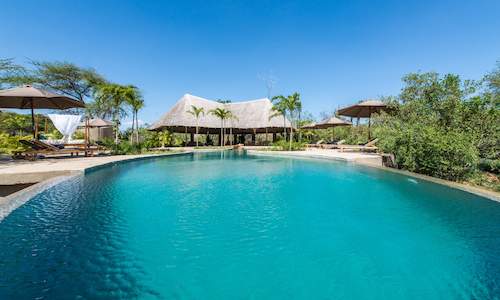 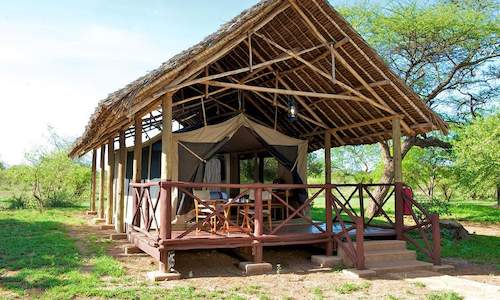 Voyager Ziwani Camp is a Tsavo safari camp situated on a private conservancy on the edge of the Tsavo West National Park. It offers a tranqu...more
Kenya Travel | Best of Kenya Safari and Tour
©2022 Siyabona Africa (Pty)Ltd - Private Tours and Safari