The main entrance gate to the park is the Mtito Andrei Gate which is located about 233km (144 miles) from Nairobi on the Mombasa Road.

Airport - As the area is so vast several of the camps and private lodges have their own private airstrips, namely at Aruba, Satao, Sala, Ithumba, Sangayaya, Mopeo and Bachuma.

Tsavo East is Kenya's oldest national park. It is home to the largest Elephant herds in the country, as well as large prides of Lions. The region was made famous due to the Maneaters of Tsavo, two Lions that killed around 130 people during the construction of the railway line in 1898. Today tourists can see the large prides of Lion which call the Tsavo National Park home.

One of the Park's most recognisable features is the Yatta Plateau which is the longest lava flow in the World, stretching for over 300km (185 miles). Another attraction is the Lugards Falls, where the Galana River cascades over a series of rapids created by interestingly shaped rocks. The Park offers the quintessential safari experience, and the game viewing is usually best around water sources such as the Aruba Dam.

The Park is home to a good population of Giraffe, many Zebra, Impala and Gazelles, as well as irascible Buffalo. Predators are represented by large prides of Lions, elusive Leopards, and the fastest animal on land - the Cheetah.

Satao Camp - Satao Camp is and unfenced camp in the heart of the Tsavo East National Park. It is shaded by a grove of Tamarind Trees and overlooks a popular waterhole. The camp offers an Out of Africa style safari experience with guided game drives led by knowledgeable local guides. Accommodation is offered in luxury tented suites that have verandas from which you can watch Elephants come down to drink.

Galdessa Camp - Galdessa Camp is situated on the banks of the Galana River surrounded by beautiful doum palms inside the Tsavo East National Park. The riverside location means that there are often wildlife sightings from the dining room. Accommodation is offered in spacious en-suite bungalows. The camp specialises in guided walking safaris which allow you to enjoy a true bush experience.

The Tsavo East National Park has a moderate climate as it is located close to the equator. The temperatures range between 20 and 30 °C. There are two wet seasons, the long rains between March and April and the short rains between November and December. 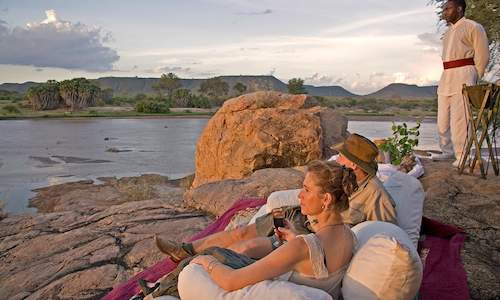 Take a walk on the wild side at Galdessa Camp in the Tsavo East National Park. Your Kenya safari tour unfolds around the scenic Galana River...more 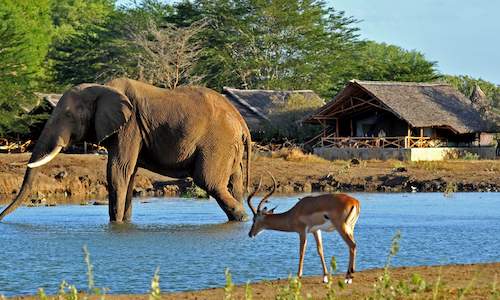 It's the little things that count at Satao Camp in Tsavo East - the warmest of smiles and a can-do approach to everything is what sets this ...more
Kenya Travel | Best of Kenya Safari and Tour
©2022 Siyabona Africa (Pty)Ltd - Private Tours and Safari