Come and see the diverse wildlife of the Amboseli National Park against the majestic backdrop of beautiful Mount Kilimanjaro in Kenya.

The Amboseli National Park is situated in the Kajiado District, of the Rift Valley Province in Kenya on the border with Tanzania. It is considered to be one of the top safari destinations in Africa and is famous for its landscape, dotted with African wildlife, with the majestic snow capped peak of Mount Kilimanjaro in the background and is one of the best places in Africa to view large herds of elephants up close.

Amboseli has an endless underground water supply filtered through thousands of feet of volcanic rock, from Kilimanjaro’s ice cap, which funnels into two clear water springs in the heart of the park. However, the climatic pendulum often swings from drought to flood, as seen in the 1990’s where ceaseless rain turned Amboseli into a swamp, then a few years later the rains failed and the grass covered plains turned into dust.

Amboseli Airport is located inside the Amboseli National Park, but some of the lodges have their own private airstrips.

Amboseli National Park lies 240 km (150 miles) from Nairobi. Travel along the Nairobi/ Arusha road via Namanga and enter the park through the Meshanani Gate. An alternate route is to travel the Mombasa route - this means you will enter Amboseli through the Tsavo West National Park by the Kimana Gate.

Amboseli National Park is mostly arid, but has several permanent springs which feed three swamps which provide life-giving water for the animals. Most of the large mammals such as Elephants, Buffalo and Hippo are found around the swamps.

The swamps are surrounded by open savannah plains. Amboseli is known for its easy game viewing due to the open nature of its landscape, making for great photographic opportunities.

In Amboseli National Park you can enjoy self-drive or guided game drives. Private conservancies on the edge of the park offer walk safaris, horseback safaris and hot air ballooning.

Satao Elerai - This camp has a wonderful position on a private conservancy near Amboseli, and has scenic views towards Mount Kilimanjaro. The lodge has a wonderful quirky feel. Accommodation is in luxurious, spacious en-suite safari tents that have private decks which have wonderful views. Explore the region on game drives, walking safaris, cultural visits and much more.

Tortilis Camp - Tortilis is named after the flat topped thorn trees that occur in the region. This luxury camp offers you accommodation in spacious en-suite tented rooms under thatch. The lodge is constructed out of natural materials and overlooks a waterhole that attracts lots of wildlife. Explore the concession and Amboseli on game drives and bush walks.

The Amboseli Region is hot and dry as it is situated within the rain shadow of Mount Kilimanjaro, which lies to the northwest. Due to its proximity to the equator, there is little variation in temperature throughout the year. Temperatures are usually between 27 and 30 degrees Celsius.

The Park offers good wildlife viewing throughout the year, however to avoid the mud of the wet season it is best to visit the park between January and February, or June through September.

What you need to know

The Park is in an area where malaria is prevalent. It is advisable that you speak to your local GP about prophylactics before embarking on your trip. 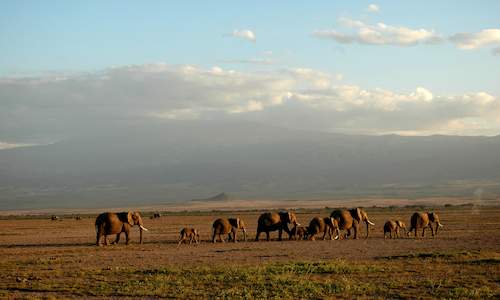 See Amboseli National Park safari lodges in Kenya. Amboseli is famous for getting close to elephants and other wildlife species....more 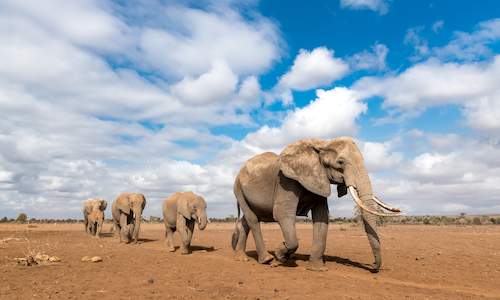 Amboseli National Park is impressive for its wide-open vistas and plains. Since the establishment of the Satao Elerai Conservancy elephants ...more
Kenya Travel | Best of Kenya Safari and Tour
©2022 Siyabona Africa (Pty)Ltd - Private Tours and Safari