Kenya's Lake Nakuru is one of the greatest spectacles on earth with its millions of feeding flamingoes and wildlife rich shore.

'Dabbed in colours of pink as far as the eye can see, the lake shore throbs to the sound of squawking and croaking from the multitude of feeding flamingoes. Millions of greater and lesser Flamingoes squabble in the shallows. On the shore White Rhino and Waterbuck graze among troops of foraging Baboons'.

Lake Nakuru is a wildlife haven but it is the Flamingoes that have earned it its reputation. First time visitors to the park are never disappointed as the sight is quite overwhelming.

Lake Nakuru is the best lake for viewing Flamingoes of all of Kenya's Rift Valley lakes and it is easily the most accessible, and popular of them all. The lake was dubbed by famous ornithologist Roger Peterson as the world's 'Greatest Bird Spectacle'.

The park has a number of vantage points from which to view the lake shore and the massing Flamingoes - and the occasional splashes of white indicate small groups of pelicans that arrived to feed on the alkaline-tolerant fish that were stocked in the lake by the authorities to control mosquito larvae. The fish bred rapidly and attracted a wider variety of birds to the lake.

From the viewpoint the landscape of Nakuru comes into focus. The area is a depression, not unlike Ngorongoro, with the lake dominating the scene. From the shore plains of grass reach into forests of fever trees that hug the ridges.

Game in Nakuru is plentiful with Lions, Impala, Defassa Waterbuck, White Rhino and big herds of Buffalo roaming the open grasslands. A special sighting at Nakuru is the Rothschild Giraffe, introduced into the park for their special protection. With distinct patterning the Rothschild matches the Reticulated Giraffe of the north for dramatic colouring. The park is also a sanctuary for the Black and White Rhino.

The park does not have Elephants as there is the concern that they would damage the fever tree forests but the park is said to have the highest number of Leopard per square kilometer than any park in Africa.

Most visitors use Lake Nakuru as a stopover on route to the Masai Mara and only spend one night in the park, thereby missing much of the experience. A two night stay is highly recommended. 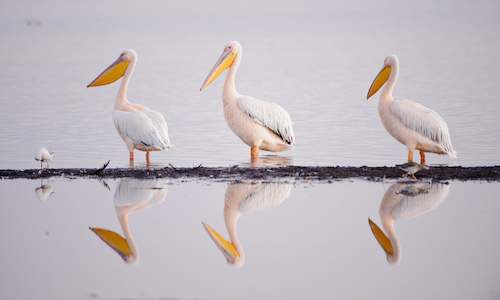