Lake Baringo in remote west-central Kenya is a fascinating place for geologists and nature lovers' alike, with outlandish landscapes and prolific birdlife.

Part of the East African Rift Valley, Lake Baringo is one of only two freshwater Rift Valley lakes, together with Lake Naivasha, in Kenya. It is in the remote west-central region of Kenya, with only Lake Turkana being further north.

Lake Baringo is fed by a number of rivers, but has no visible outlet. It is assumed that the water seeps away into the faults in the bedrock. The water level of Lake Baringo dropped to some of the lowest levels recorded due to drought and agricultural irrigation but the floods in Northern Kenya in recent years pushed the level up alarmingly.

This has caused the water levels to rise to up as much as four meters, putting locals at risk and damaging the limited tourism structure. The high water levels are presumed to be a result of the large deposits of sediment brought in by the flooding. Most of the tourist structures were damaged by the rising waters.

Many of the Kenyan Rift Valley lakes are known for their birdlife, and in particular the concentrations of Flamingoes, but because of Baringo's freshwater properties Flamingoes tend to stay away. The lake is home to more than 470 species of birds however - many of which breed on and around the lake.

It is an important stop for migratory birds - both inter-Africa and globally. Lake Baringo has seven fish species with the Nile Tilapia been endemic. Fishing is an important part of the socio-economics of the region.

The numbers of Nile Perch have declined markedly in Lake Baringo over the years, but this may have to do with the proliferation of the African Lungfish which was introduced into the lake in the 1970's. The Lungfish is now the most important food source from the lake.

The area is also home to a number of species such as Hippo, Crocodile, Zebra, Klipspringer, Grant's gazelle, Chandler's Mountain Reedbuck, and the rare Greater Kudu.

Lake Baringo has several islands such as Ol Kokwe Island which has hot springs and fumaroles, some of which have precipitated sulphur deposits. The area is also important for its archaeological and palaeontological sites, where important hominid fossil discoveries have been made.

The area is becoming more popular as a tourist destination despite floods and unrest in the central west parts of Kenya. A range of accommodation is available in the region and boat hire is also easy. Main road access to Lake Baringo is directly from Nakuru by private transport. The nearest town to the lake is Kampi ya Samaki. 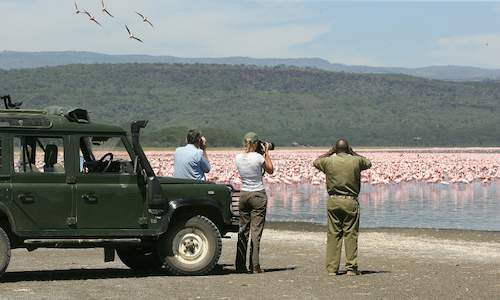 Africa's Great Rift Valley is visible from space and is home to some of the most dramatic scenery on earth but it is in Kenya where the Rift...more
Kenya Travel | Best of Kenya Safari and Tour
©2022 Siyabona Africa (Pty)Ltd - Private Tours and Safari